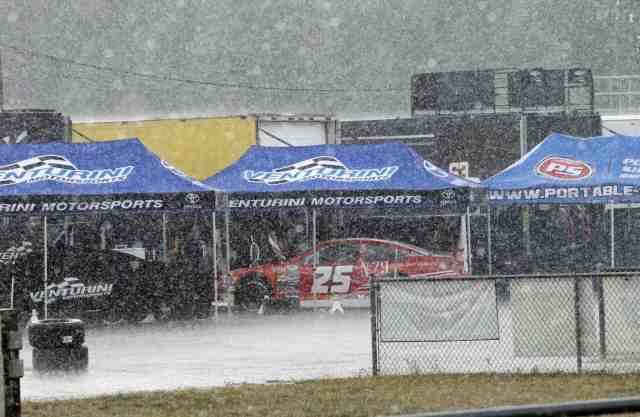 Yeah, there has been plenty of this going around. This photo was taken after a brief practice session for the ARCA Racing Series last Saturday at Berlin Raceway in Marne, Mich. (Rich Corbett/Left Turn Media). At nearby Kalamazoo Speedway, half of the scheduled Friday events so far this year have been rained out. And one of the biggest Late Model Stock Car races in the mid-Atlantic states, Hampton Heat at Langley Speedway in Hampton, Va., was called off because of weather; hopefully the August 18 makeup date doesn’t conflict with too many racers’ schedules.
We were planning on seeing Hampton Heat, but actually having a couple of rainouts on the docket nationwide might have been a bit of a blessing for us. We were on a family vacation, and for five days on a cruise ship, work wasn’t a concern. Then the workload was hot and heavy until this morning trying to get caught up, although that workload was lessened a little with a few postponements.
Fortunately most of those postponements were called well enough in advance to keep most of the racers from trekking to racetracks just to watch the rain. And two racers in the upper Midwest, whose exploits are covered in the latest issue of Late Model Digest, redirected their team haulers to other races and wound up taking checkered flags and ending long victory droughts (both at Wisconsin Dells).
We wish all of you a happy (and on race weekends, dry) remainder of the season.
Thank you for your support!